The best preserved and most moving of the Brazilian missions is São Miguel Arcanjo, located in the city of São Miguel das Missões, 53km southwest of Santo Ângelo. The elegant church, designed by an Italian architect who was also a Jesuit priest, earned Unesco World Heritage status in 1984. It is surrounded by the mystical ruins of the Jesuit settlement, which evokes the feeling of ‘paradise lost.'

The archaeological site also includes the excellent little Museu das Missões. Designed by Lúcio Costa, of Brasília fame, the museum contains an impressive collection of religious artifacts that were rescued from the ruins. A spectacular, if campy, sound-and-light show illustrates the history of the missions.

São Miguel das Missoes (1687), Rio Grande do Sul, is listed by Unesco as a World Heritage Site. The ruins of São Miguel church are the main symbol of this missionary civilization. Designed by the Jesuit priest and architect João Batista Primoli, the church is an example of the baroque architecture of the missionaries, inspired by Renaissance rules. The largest piece of religious architecture in the Jesuit settlements, it still has the remains of walls, partitions, vaults, facade and bell tower. The ruins of São Miguel das Missões are protected by UNESCO since 1983. 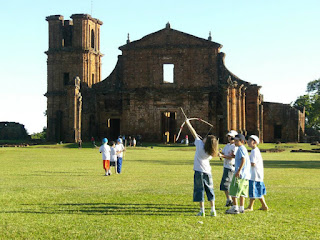 It was one of the many Jesuit Reductions in Argentina, Brazil and Paraguay. Jesuit missionaries founded the mission in the 18th century in part to catechize the Guaraní indian population and to protect the natives from the Portuguese slave traders known as the Bandeirantes.

Next to it is the Museum of Missões, where objects of art and architecture are on display and there is a reconstruction of the settlement and the Indian houses by the architect Lucio Costa.

The Jesuit Missions were the product of a cultural mixture and represent a real example of a political and social organization; its architecture and artistic manifestations were devoted to decorate the missions, which, after the expulsion of the Jesuit Fathers, turned abruptly into ruins that are nowadays visited by tourists from all over the world. 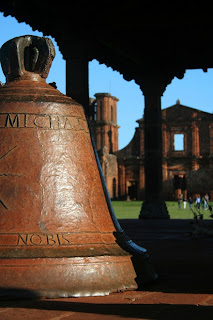 This mission was built between 1735 and 1745. The Treaty of Madrid in 1750 handed sovereignty over the area from Spain to Portugal and the Jesuits were ordered to leave. Their refusal to comply led to the mission's end in a war with a Portuguese-Spanish army which had been sent to enforce the new Treaty.

The Light and Sound Show (Espectáculo de Som e Luz) occurs everyday at dusk and explains the history of the Jesuits, Guarani indians and the Portuguese and Spanish empires in this territory. You can also enjoy the blue starry nights in this remote region of the pampas during the presentation. You may need a jacket even in the summertime to stay comfortable (remember that summer is from December to February in the southern hemisphere). Shows start for November, December and January: 9:30pm. Show start for February, March, April, August, September and October: 8:00pm. Show start for May, June and July: 7:00pm (wear a coat). Cost: R$5.00, R$2.50 with any domestic or international student ID, R$2.50 for seniors over 60 years of age. Purchase tickets at the archeological site entrance.


"AN EXCITING HISTORY"
One of the most exciting stories of humanity occurred between 1609 and 1768, when Jesuit priests and Guarani Indians had built a new alternative for humanity.


The project was constituted from the utopias of Morus, Bacon and Campanella. The Lés Lettres Edificantes et Curieuses magazine, directed by the Jesuits, compared the Indians to the early Christians and described their communities as "the ideal fulfillment of Christianity". Father Lugon said that it was "the most original of societies carried out". Paul Lafargue, together with Bernstein, Kautski, Plechanov explains that the project was one of the most extraordinary experiences that ever took place. Charlevoix and Muratori also recognized it as "an unprecedented model of Christian society". Voltaire said that the Jesuit-Guarani project was a "triumph of humanity". Montesquieu called the "first industrial state of America." Abbot Carbonel called it "spontaneous collectivism." Pablo Hernandez in the Organización Social de las Doctrinas Guaranis, writes that “the marvelous comes at every step”. The philosopher Rayal wrote: “Here the laws were observed, an exact civility prevailed, customs were pure, a happy fraternity united hearts, all the arts of necessity were perfected, abundance was universal there. He had the grace of the children, a purity full of candor. The new world we are seeking to accomplish can not belittle the lesson provided.”

Our hostel, Pousada das Missões, stays just 100 meters from ruins of São Miguel das Missões. Rooms have 2, 4 and 8 beds and facilities include evening meals, laundry and luggage store. Horse riding trips and tours at Jesuit missions can be arranged.

It is a Youth hostel (filliated to Hostel International). There are private and collective rooms with a/c and TV, WI-FI, lovely grounds with pool and jesuitic-missions architecture. 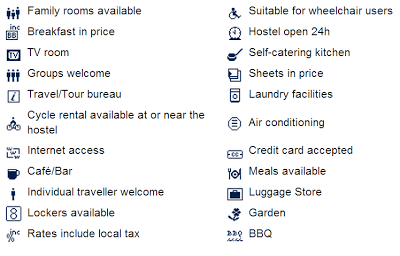 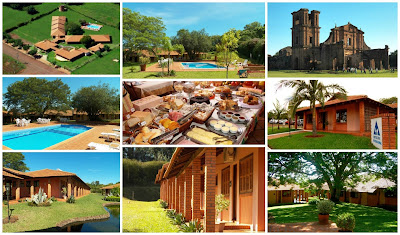